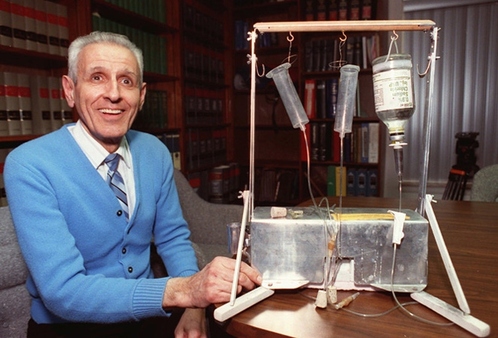 American right-to-die activist Dr. Jack Kevorkian poses with his creation, the "Thanatron" in Michigan on February 6, 1991. The "Thanatron" consisted of three bottles that delivered consecutive doses of fluids: first a harmless saline solution, followed by a painkiller (thiopental), and then finally a fatal dose of potassium chloride. Patients with a terminal illness who wanted to end their lives sought out the help of Dr. Kevorkian to help them achieve a painless and easy death. Using Kevorkian's creation, patients who were ill could even administer the lethal dose of potassium chloride themselves. 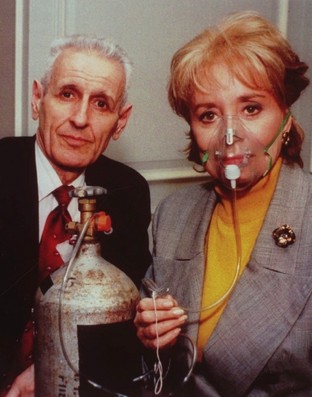 In this March 11, 1993 photo Barbara Walters and Dr. Jack Kevorkian pose with the "Mercitron". The device in this picture is similar to the ones Kevorkian used in his assisted suicides. 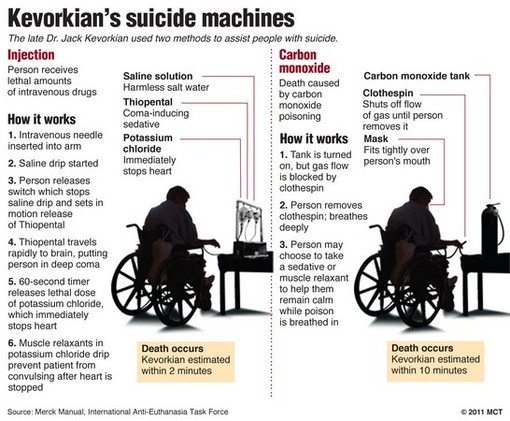 Dr. Kevorkian used two methods when assisting ill patients who wanted to end their lives. These methods involved using his creations the "Thanatron" and the "Mercitron". The "Thanatron" enabled patients to administer lethal intravenous drugs into their bodies by an injection. When Kevorkian's medical license was suspended he became unable to legally obtain the drugs needed for the "Thanatron". This led to the creation of the "Mercitron" which was the process of delivering carbon monoxide through a mask.